The portal’s pilasters as well as its cornice corbels and socles are decorated using décor approximating nature, which had just come into fashion.

The selection of plants on the cartouche, both pillars, and the socle is different. Green plants and flowers are depicted, along with European spruce cones, oak leaves, acorns, and grapes. The female inflorescence of humulus lupulus, so-called common hops in the vernacular, carved on the pillars refer to the owner of the house and his name: hops are Hoppen in German and the origin of the meaning of the name Höppner most probably derives from the word for brewer or hops grower. 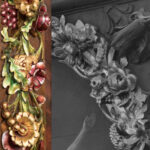 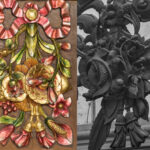 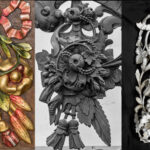