The pelican on the sounding board together with its nest resembling a crown of thorns was carved out of one large wooden block. While the pelican visually seems to be larger than the pulpit’s figures, it was actually carved out of a wooden block that was shorter than those used for the pulpit’s figures. Its outstretched wings add volume to the figure. Like the pelican chicks, the wings were carved separately and later nailed to the figure. 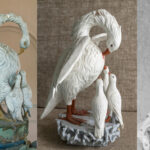 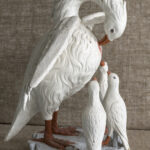