The retable’s polychromy from Ackermann’s time has survived only  as incredibly tiny, isolated fragments – the damaged, peeling paint was evidently removed for the most part before repainting it for the first time so that the new coat of paint would adhere to the wood.

The retable’s coating remained monochrome at the start of the 1940s when Sten Karling, the grand old man of Estonian woodcarving art, introduced Ackermann’s oeuvre in his monograph (Holzschnitzerei und Tischlerkunst …, 1943). Examinations ascertained that the sculptures and ornamentation were coated with bronze paint at that time, while the retable’s architectonics were evidently coated with bluish-grey paint.

The retable was last repainted, quite professionally, in 1939. An artist named Buchholz did the job according to Sten Karling’s instructions, who had gone to study the altar and identified its original colours. The retable’s current coat of paint, which can be seen in the photograph from 1940, evidently originates from precisely that time. 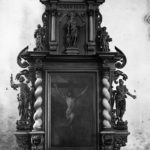 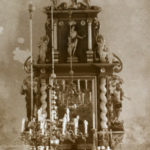 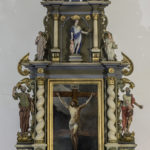