The figures of Aaron, Moses, John the Baptist (lost), Christ ruling and blessing the world, or Salvator Mundi, and the Apostle Paul of the new neo-Gothic pulpit’s corpus were carved by Ackermann. It is possible that a statue of Peter was beside Paul on the old pulpit, as is the case in many pulpits and retables by Ackermann.

The appearance of a statue of Aaron is exceptional in Ackermann’s oeuvre, as is the placement of Moses and John the Baptist on the pulpit’s corpus – Moses is generally either the supporting figure of the pulpit or on the retable together with John the Baptist. The selection of such characters from the Old and New Testaments for decorating the pulpit’s corpus was probably proposed with the pastor’s approval by the customer who commissioned the Lihula pulpit.

The old baroque figures were painted white in the 19th century in order to give them the appearance of marble sculptures, which was in fashion at that time, and to add them to the new, dark brown pulpit. 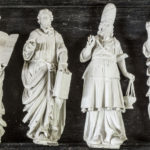 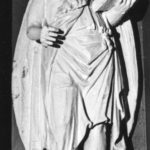